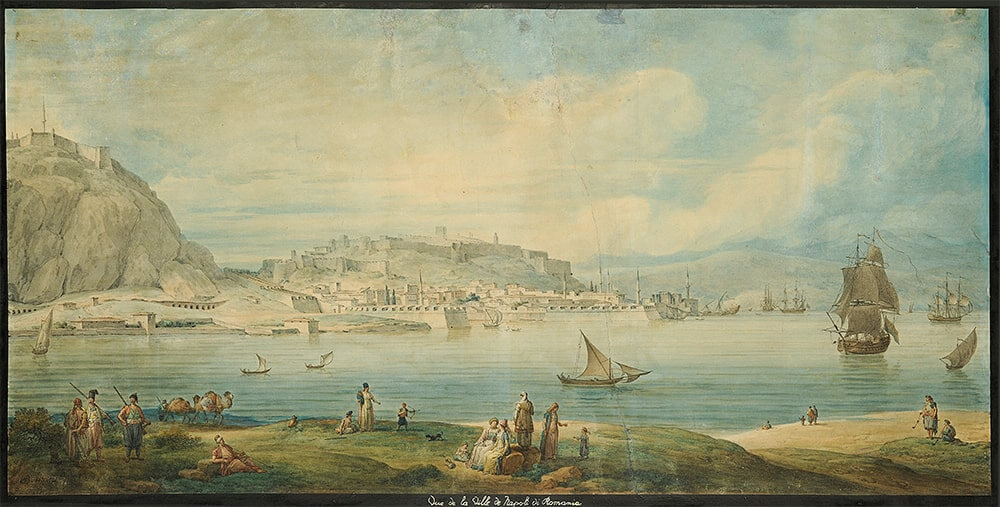 The Collection includes about 500 compositions by Greek and foreign artists, and sets of works.

The Collection includes about 500 compositions by Greek and foreign artists, and sets of works. Among these are: the ink drawings by Athanasios Iatridis (1828-1832) with subject the death of the fighter of the Greek Revolution Markos Botsaris, watercolour landscapes and genre scenes painted by Bavarian officers in Greece under King Othon, oil paintings of martial events from the Greek War of Independence and the Greek-Italian War. Very important is the composition Sea Battle of Lepanto (1571), by Georgios Klontzas. Of particular artistic and historical value are the sets of works, such as the almost complete extant oeuvre of architect and painter Gerasimos Pitzamanos (1787-1825), unique visual testimony of life in pre-revolutionary Greece, the paintings with scenes from the Struggle for Independence (thought of I. Makrygiannis, hand of Pan. & Dim. Zographos), watercolours from Othon’s Greece by the Scotsman J. Skene, and the series of drawings and pastels by Thaleia Flora-Karavia (1871-1960) with scenes and persons from the Balkan Wars, the Asia Minor Campaign and the Greek-Italian War. In the Historic House of Lazaros Kountouriotis on the island of Hydra there are works by Periklis Byzantios (1893-1972), Dikos Byzantios (1924-2007) and Panagiotis Tetsis, artists whose life and activity was associated with this island in the Saronic Gulf.

The Collection of Portraits, which numbers about 600 works of the nineteenth and twentieth centuries, began to be formed with the founding of the Museum in 1884, mainly from gifts of agencies and individuals, particularly descendants of those depicted, and continues to be enriched to this day. Its history is a roll-call of names of prominent personalities, whether those depicted or those who donated the works. The Portrait Collection comprises oils, watercolours, chalk sketches, pastels, drawings, and so on, works of well-known painters of Modern Greek art, such as Dionysios Tsokos, Dionysios Kalyvokas, Andreas Kriezis, Nikolaos Kessanlis, Georgios Iakovidis, Nikiphoros Lytras, Eleni Prosalenti, Polychronis Lembesis, Periklis Pantazis, Ioannis Oikonomou, Georgios N. Roilos, Georgios Avlichos, Spyridon Vikatos, Pavlos Mathiopoulos, Thaleia Flora-Karavia, Konstantinos Parthenis, Periklis Byzantios, Konstantinos (Dikos) Byzantios, Georgios Mavroidis, Panagiotis Tetsis, and others.

There are portraits of scholars, Phanariots, princes, protagonists of the Greek War of Independence, members of the Greek diaspora and benefactors of the Nation, philhellenes, clerics, kings, politicians, leaders of the Cretan Struggles for freedom, the Macedonian Struggle, the Balkan Wars, and so on.