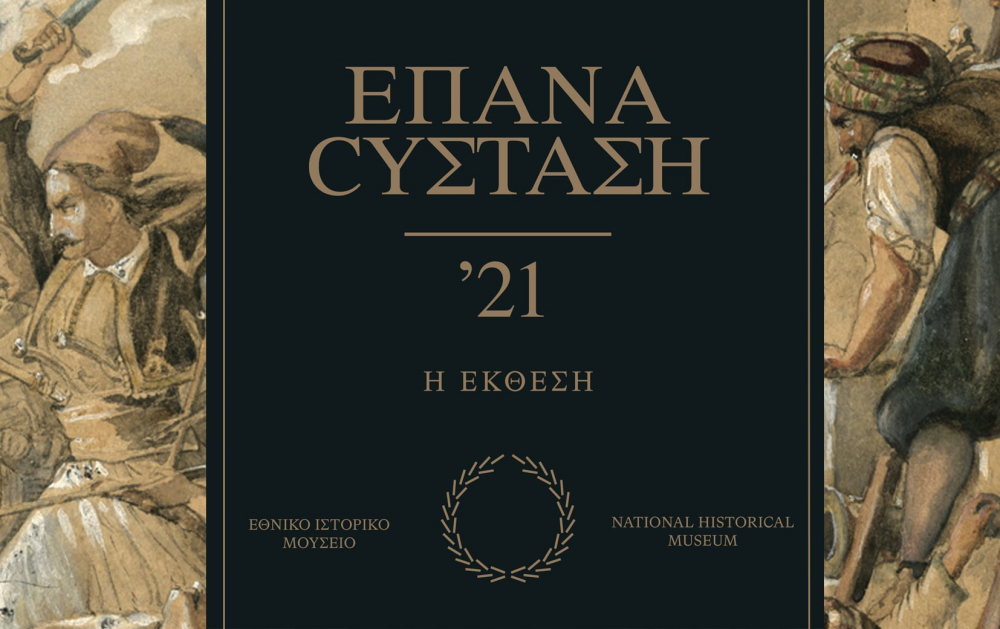 Duration
May 2021- June 2022
Timetable
Tuesday-Sunday, 8:30-14:30. Free entrance
Place
National Historical Museum, Old Parliament Building, 13 Stadiou St. 10561 Athens
The anniversary program of the Museum for the celebration of the 200 years since the beginning of the Greek Revolution culminates with the main exhibition: Revolution ΄21 Reframed

The anniversary program of the National Historical Museum (NHM) for the celebration of the 200 years since the beginning of the Greek Revolution (https://www.nhmuseum.gr/epanacystasi-21) culminates with the main exhibition ΕΠΑΝΑCΥΣΤΑΣΗ ΄21 (Revolution ΄21 Reframed). The program is under the auspices of the Hellenic Ministry of Culture and Sports and is being developed in 12 cities in Greece, while it also includes the organization of a floating exhibition, which will travel to the Aegean islands.

The main exhibition takes place in the framework of the “Bicentennial Initiative 1821-2021”, with large funding from John S. Latsis Public Benefit Foundation and with the support of the J. F. Costopoulos Foundation, for the implementation of the interactive exhibit of Riga Charter. The technological support came from the Foundation for Research and Technology Hellas (FORTH). It is structured in seven sections, in which rare relics of the Struggle, documents and rich archival material are displayed. It highlights the ideas, causes, persons, events and results of the Greek War of Independence.

Starting from the international scene, the narrative goes to the Ottoman Empire and the ideological preparation of the Struggle, in the context of the movement of the Modern Greek Enlightenment. The individuals, who shaped the developments that led to the outbreak and consolidation of the Revolution, the opposing armies and the military operations, on land and at sea, are analyzed in relation to the particular conditions of the place and the society of the time.

The daily life of the fighters and the life of the civilian population are presented with references to snapshots from the lives of men, women and children. Dramatic stories of the search or ransom of prisoners emerge from documents. On the occasion of shocking events, such as the massacres of Chios, the death of Lord Byron and the Exodus of Mesolongi, the development and contribution of the philhellenic movement is recorded. The efforts of the Greeks to make public their just Struggle are reflected in the press of the time.

The exhibition is framed by rich audiovisual material and interactive, digital exhibits. The visitors have the opportunity to approach the way of life, the events, the armament of the Struggle and the revolutionary press, choosing the object of their interest from a wide range of information. The original interactive exhibit of Riga Charter offers a documented and comprehensible approach to the period of the Modern Greek Enlightenment.

The digital exhibition ΕΠΑΝΑCΥΣΤΑΣΗ ΄21 (Revolution ΄21 Reframed), which illuminates invisible sides of the Revolution through stories of 80 documents, operates also through the website of the NHM (https://www.nhmuseum.gr/epanacystasi-21/kentriki-ekthesi/item/17311-i-psifiaki-ekthesi). The points of interest are representative exhibits of the exhibition, through images, texts (Greek, English) and sound. Through the Tour Experience, some parts of the exhibition are accessible for a 360° virtual tour.

With the support of the National Bank, Eugenides Foundation, Captain Vassilis and Carmen Constantakopoulos Foundation, Lamprakis Foundation, Athanasios C. Laskaridis Charitable, Aikaterini Laskaridis Foundation and Bodossaki Foundation, the anniversary exhibition will travel from north to south, in Alexandroupoli, at the Ethnological Museum of Thrace, in Thessaloniki, at the Teloglion Foundation of Art of the Aristotle University of Thessaloniki (AUTh), in Veria, at the Public Benefit Enterprise of Multiple Development of the Municipality (KEPA), in Larissa, at the Folklore Historical Museum, in Mesolongi, at the Mesolongi Byron Society, in Galaxidi, at the Maritime and Historical Museum, in Nafplio, at the Branch of the National Gallery-Alexandros Soutsos Museum, and in Chania, at the Maritime Museum of Crete.

In the framework of the Piraeus Bank’s anniversary actions for the Bicentennial of the Greek War of Independence in 1821, the exhibition ΕΠΑΝΑCYΣΤΑΣΗ ’21 (Revolution ’21 Reframed) will also travel to three museums of the Piraeus Bank Group Cultural Foundation (PIOP): at the Silversmithing Museum in Ioannina, at the Open-Air Water Power Museum in Dimitsana and at the Chios Mastic Museum in Chios.

Finally, with the support of Piraeus Bank and the Maria Tsakos Foundation, a specially designed floating exhibition will travel to historic islands and ports in the Northeast Aegean.