Did you know that the first printed greek play... 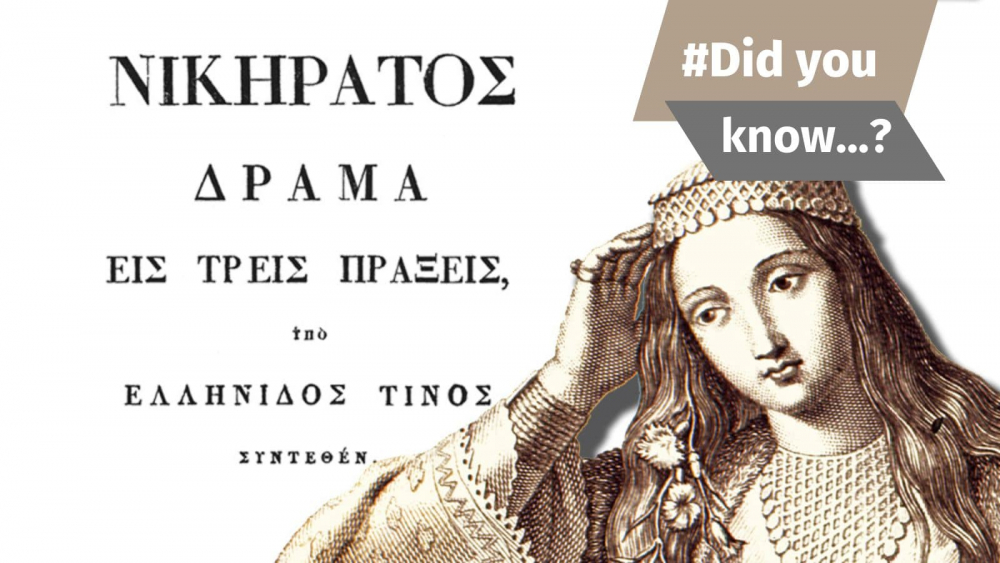 ... for the Greek War of Independence was ‘Nikiratos’ by Evanthia Kairi?

Evanthia Kairi was born on the island of Andros in 1799. She was sister of the scholar Theophilos Kairis, being also his student at the School of Kydonies. In 1821, when the Greek War of Independence broke out, she returned to Andros, where she remained until the summer of 1824; she then followed her brother Dimitrios to Syros, where he became involved in commerce. In the summer of 1839, she returned to Andros again, where she remained permanently until her death (1866).
The Exodus of Mesolongi shocked the Greeks and also Evanthia Kairi, who wrote the drama ‘Nikiratos’ in 1826. The plot takes place in the besieged Mesolongi and concludes with the Exodus. ‘Nikiratos’ was printed in Nafplio, in 1826, and its playwright dedicated it “to the heroic women who sacrificed themselves for freedom and the nation”.
The success of ‘Nikiratos’ gave Evanthia Kairi a place among the scholars of the time. In 1827, Alexandros Soutsos in an article he published in the newspaper ‘The Friend of the Law’ (no. 266, February 7) revealed her name by writing: “Although Evanthia wanted with modesty to anonymously publish her remarkable drama tilted ‘Nikiratos’, given that we would like to encourage the qualities and highlight the attributes, we dare to declare her the playwright of this work, classifying her in the Dance of the Muses […]”. The work was presented in Ermoupoli, Athens and Andros, while a part was translated into Italian by Severiano Fogacci.