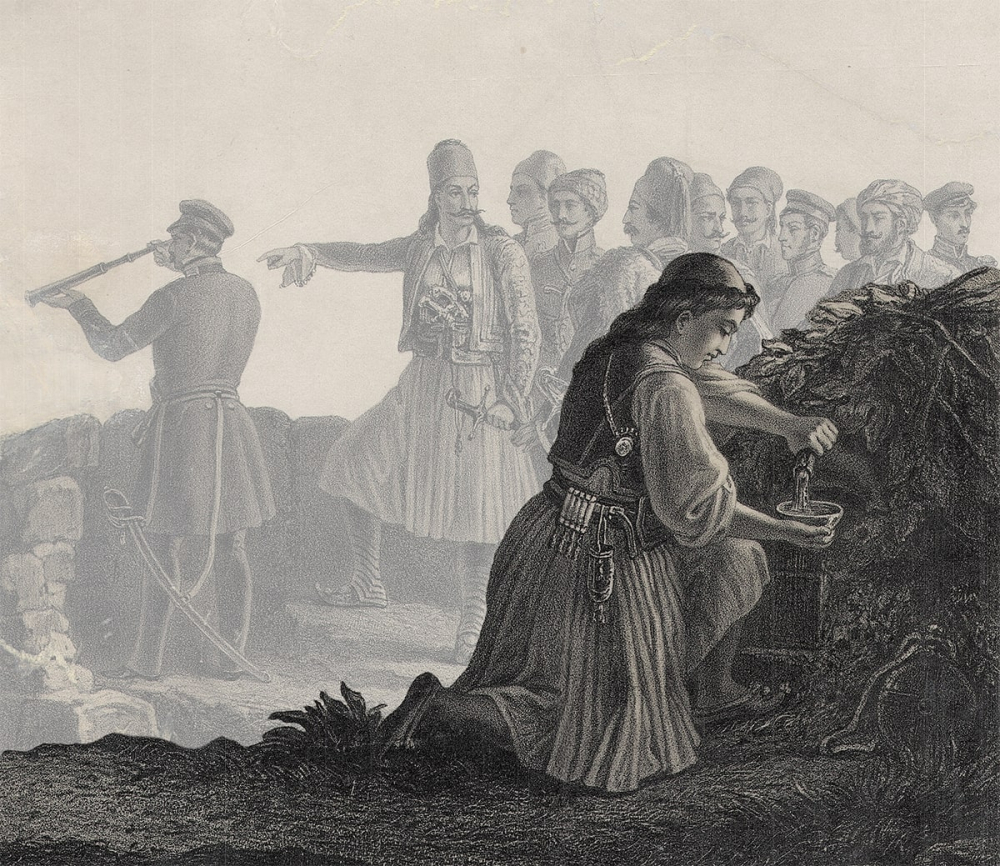 The Camp of Georgios Karaiskakis (detail). Lemercier, after Th. Vrizakis (1855) NHM, Collection of Engravings
... was among Karaiskakis ‘palikars’?

This was a Muslim woman, a prisoner from Tripolitsa, who was baptized and named Mario and whom Karaiskakis had under his protection until the end of his life. He will even leave her 4,000 kuruş (‘grosi’) in his will.  According to D. Ainian, this girl was dressed like a man and had the name Zafeiris.

G. Cochrane in his work “Wanderings in Greece” describes Mario as follows:

"Among his followers was an orderly, who at tended him everywhere, -- and of whom I must pause to give a brief account. This orderly was a Turkish woman, dressed partly in man's attire, and partly in female. She had been taken prisoner by Karaiskaki at Tripolitsa, when that city fell into the hands of the Turks; and Karaiskaki became attached to her, and she to him. She watched him night and day. She carried over her shoulder a light Greek musket, and in her girdle a brace of pistols and an ataghan.
Her countenance was very pleasing, but pos sessing more of the Turkish than the Greek character. Her face was rather round than oval; she had a perfectly straight nose, dark eyes and eyebrows, and a complexion not at all dark, but of a healthy and beautiful white and red. Her hair was dark auburn, and was plaited, and part of it wound round a Greek red cap with a blue tassel. She wore white cotton trousers, with a white sheep- skin jacket, coming down to her waist only, which latter was encircled with a red leathern girdle, as I have said before, containing arms.
Her manners were very mild and inobtrusive, and when noticed by us strangers, she cast down her eyes with a very becoming and attractive modesty.
The conduct of this woman offered a fine specimen of what female attachment is capable of effecting. No danger, however great, kept her from the field; and although she did not fight, still she was regardless of her life while following her lord".