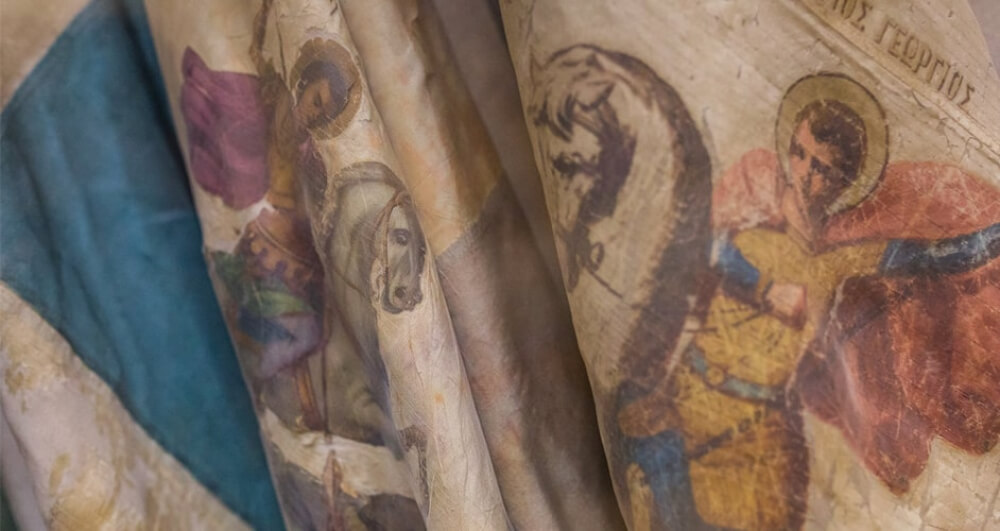 Φωτ. Λ. Παπανικολάτος
There are some 250 flags, Greek and foreign, in the Collection. Its nucleus is flags of the 1821 War of Independence, which, before the fire in 1909, adorned the Trophy Hall in the Old Palace.

After the destruction of the hall, all those flags that were rescued were presented, through the Ministry Military Affairs, to the HESG. The Collection includes indicatively: an early eighteenth-century flag from Zakynthos (Zante) in the period of Venetian rule in the Ionian Islands; banners of the period before the Struggle for Independence; flags of the 1821 War of Independence, with symbols of the Philike Hetaireia and blue-and-white flags; flags from the reign of King Othon with the phoenix blazon, the royal cipher or the Bavarian coat of arms; flags of the Greek volunteer military corps fighting outside Greece; flags of the independence movements of Epirus, Macedonia and Crete, of the military regiments during the Balkan Wars (1912-1913) and the Asia Minor Campaign (1919-1922); flags of military headquarters, of forts as well of submarines from the Greek-Italian War (1940-1941) and the Greek-German War (1941); and last, booty from the Revolution of 1821, the Balkan Wars and the Asia Minor Campaign. Rich and unique by Greek standards, the Collection has been assembled gradually and almost exclusively from donations.