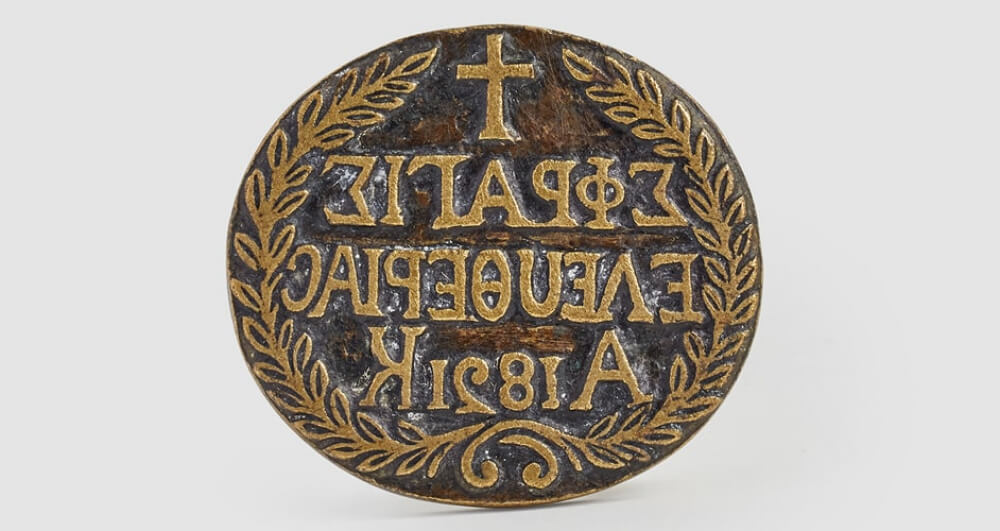 Its first acquisition was the seal of the Timios Prodromos Monastery at Glistouri, which is dated 1809 and was a gift of Alexandros Meletopoulos. The seals in the Collection date from the seventeenth to the twentieth century, with the earliest a personal seal on which is inscribed “Angelo servant of God” and the date 1688. The majority of seals are Greek, although there are also some with inscriptions in other languages. A notable group is the seals of historical persons (princes of Wallachia and Moldavia, armed irregulars – klephts and armatoloi –, members of the Philike Hetaireia, primates, etc.), which are frequently adapted as the bezel of the signet rings of their owners. There are also seals of monasteries and communities from before the War of Independence, seals of the Revolution “Of Freedom” (Eleftheria), seals of the “Provisional Administration of Greece”, of the “Hellenic State” (1828-1832), of the Greek State during the reign of Othon, the reign of George I and of the subsequent historical periods. Through the seals we follow the administrative organization of the Greeks from the period of Ottoman rule to the twentieth century. Their symbolic devices are usually the cross, religious representations, emblems of the Philike Hetaireia, the goddess Athena, the reborn phoenix, family coats of arms, and so on.