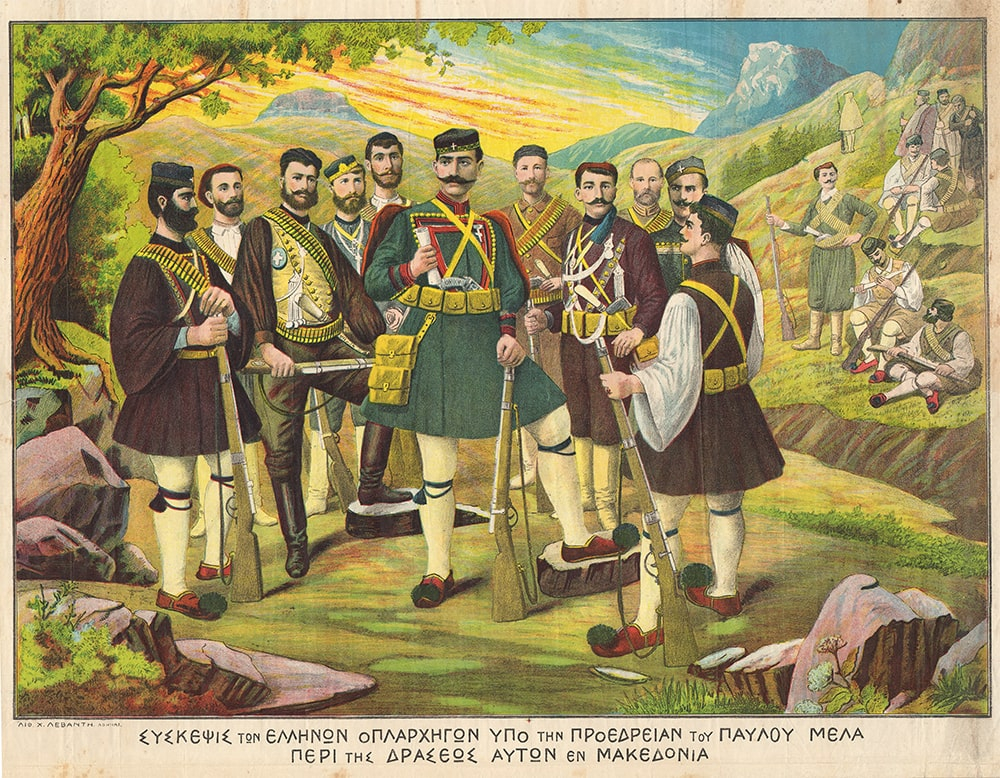 The Collection of Popular Prints numbers about 1,200 images published and circulated from the late nineteenth to the mid-twentieth century in Greece and abroad.

These are lithographs and tinted lithographs, works by well-known folk as well as academic artists, such as Sotiris Christidis, Phrixos Aristeas, Karl Haupt. Iconographically the compositions cover important events mainly of Modern Greek history. The most important units are: Ottoman period, Greek Revolution of 1821, Reign of King Othon, Reign of King George I, Liberation Movements of Crete, Macedonia and Epirus, 1896 Olympic Games, Greek-Turkish War of 1897, Balkan Wars 1912-1913, First World War, Asia Minor Campaign 1919-1922, Greek-Italian War 1940-1941. The Collection includes portraits of politicians and military men of the nineteenth and twentieth centuries (freedom fighters, members of the royal family, Greek statesmen and soldiers, national benefactors, and so on), as well as foreign prints that circulated in countries such as Turkey, Bulgaria, Serbia, Russia and France. The first piece to enter the Collection, the lithograph representing the Radical Representatives of the IX Septinsular Parliament, was donated to the Museum in 1891 by Ioannis P. Lambros.

The Collection of Cartoons numbers about 1,100 prints published in the Greek and the foreign Press, as well as original sketches/caricatures commenting on persons and events of Modern Greek and world history. The first item of the Collection was entered in 1914 and is the cartoon The Balkan Pas de Quatre by Craven Hill, from the London magazine Punch (iss. 11/12.1912). More analytically, the Collection includes: Compositions by Greek cartoonists of the early twentieth century, published in newspapers of the day. Albums with signed caricatures. Greek political-satirical printed matter, such as Romios (1883-19919) of Georgios Souris, To Asty (1887-1888) of Themos Anninos and about 460 tinted lithographs from the weekly political-satirical magazine Neos Aristophanes of Panagiotis Pigadiotis (1885-1890). Cartoons from various political-statirical periodicals (Le Petit Journal, Le Chairvari, Punch, Le Grelot, etc.). Among these are 60 tinted lithographs from the Italian political-satirical newspaper Il Papagallo of Augusto Grossi (Bologna 1873-1915). A collection of 250 cartoons from the Athenian Press, regarding the Greek-Italian War 1940-1941, gift of Takis Lappas. Last, about 200 cartoons and sketches published in magazines and newspapers in the USA, relating to the Battle of Greece (1940-1941), gift of Nikolaos Rok-Melas.