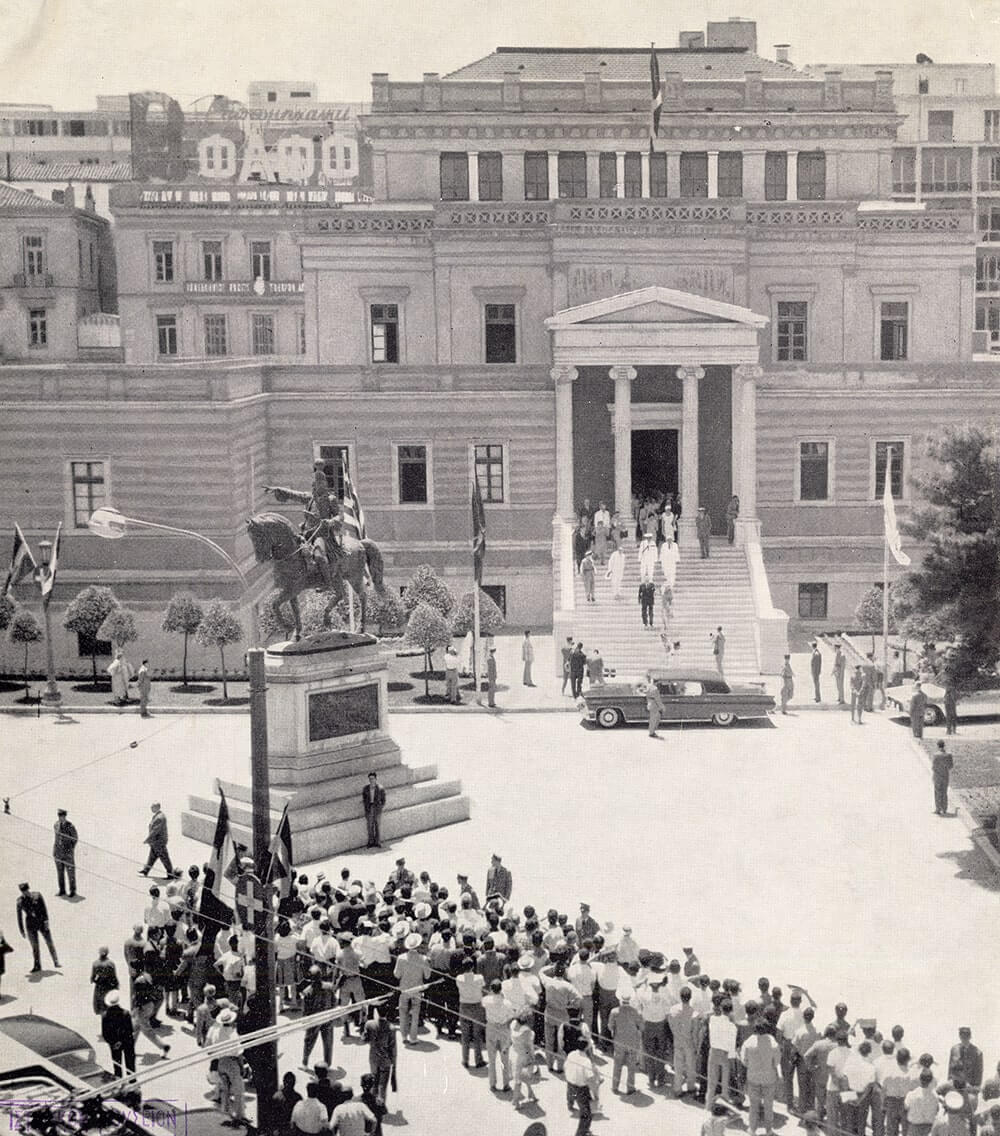 Πανοραμική άποψη του Εθνικού Ιστορικού Μουσείου στις 21 Ιουνίου 1962, ημέρα των επίσημων εγκαινίων του.
The National Historical Museum is permanently housed in the Old Parliament Building at Stadiou Street (Kolokotronis square) since 1960. The Museum narrates the history of Modern Greece: the period of Ottoman and Latin rule, the Greek War of Independence (1821), the liberation struggles, the creation of an independent state, the political, social and spiritual development of the Greeks up to the present day.

The National Historical Museum was established by the Historical and Ethnological Society of Greece, which since its creation in 1882 has been collecting historical items.The foundation of the Society is inextricably linked with its first official public appearance, with the “Exhibition of Memorials of the Sacred Struggle”, two years later.In this exhibition, in response to an appeal by the Society, the families of the fighters of the Revolution of 1821 and government bodies, such as the Ministries of War and Navy, provided exhibits of an era not so distant, that were in their possession.Most of these objects, at the end of the exhibition, were donated to the Museum of the Historical and Ethnological Society, as was its first name, thus becoming its central core.

The National Historical Museum was born through the joint action of a rapidly evolving society, in a period of research for coherent links and national identity and of creation of relevant institutions.Since then, the Museum operated for the public for over half a century in the halls of the Athens Polytechnic, becoming a reliable reference to city’s life.It continued the work of enrichment of its collections both within the country and by organizing excursions to areas of Hellenism outside the borders of the time, in Macedonia, Epirus, Asia Minor, Constantinople, Alexandria.

On the eve of the Second World War, as a measure of precaution, the items were packaged and hidden in the basement of the Polytechnic and in private rooms.

After the war, and while strong efforts were made to find adequate accommodation, the former “House of Poor Girls” on Queen Amalia Street was temporarily rented and accommodated as a rough exhibition space.Since 1960 the Museum is permanently housed in the Old Parliament on Stadiou Street (Kolokotronis Square).