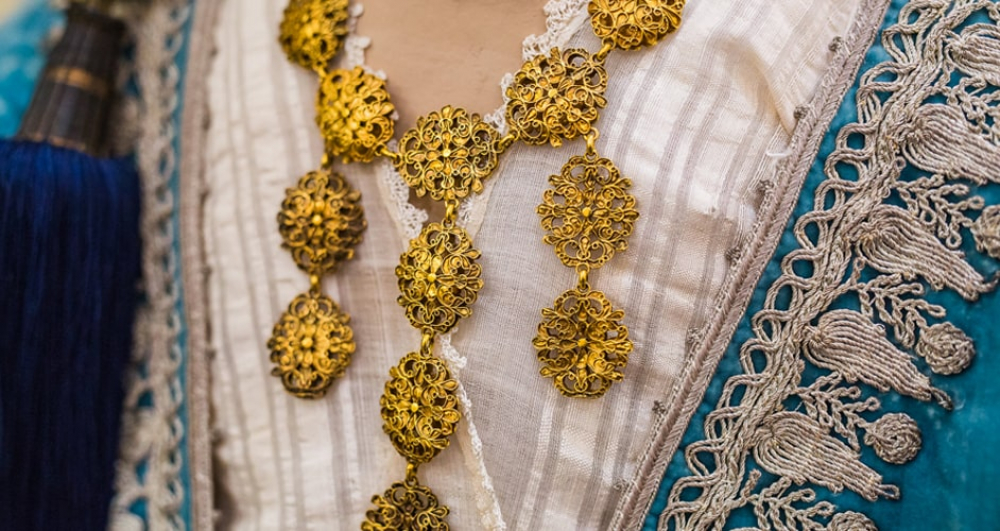 The Collection is made up of some 6,000 representative examples of Neohellenic folk art, spanning the period from the second half of the 18th to the end of the 20th c.

The first piece acquired, a female costume of the island of Psara, from the period of the 1821 Revolution, was donated by the painter Nikiphoros Lytras in 1882. Unique acquisitions are the very old female costumes from the islands of Amorgos, Ios and Lemnos. There are also costumes of historical persons, such as the Spetsiot freedom fighter Dimitrios Goudis, the Hydriot Prime Minister Dimitrios Voulgaris, of Kyriakoula Kyriazi, likewise from Hydra, of Kyra-Phrosyne, and others.

There are also urban costumes, as well as children’s garments and christening layettes of the twentieth century, in the Collection. Another important unit includes embroideries, hand-woven textiles, printed cloths for decorating the house and utilitarian objects such as distaffs, knitting needles for stockings and wooden stamps for printing textiles. Products of gold- and silver-working are represented too, such as jewellery, wedding crowns, amulets and votive plaquettes (tamata). Among these are pieces of jewellery of eponymous figures, such as the belt buckle of Moscho Tzavella from Souli and the engraved betrothal ring of Zambia, mother of Theodoros Kolokotronis.

The artifacts in the Folklore Collection, products mainly of domestic manufacture or of local workshops, imprint the social, economic, as well as climatic conditions in the various regions of Hellenism, and express the imagination, lived experiences and aesthetics of those who created them and those who used them.