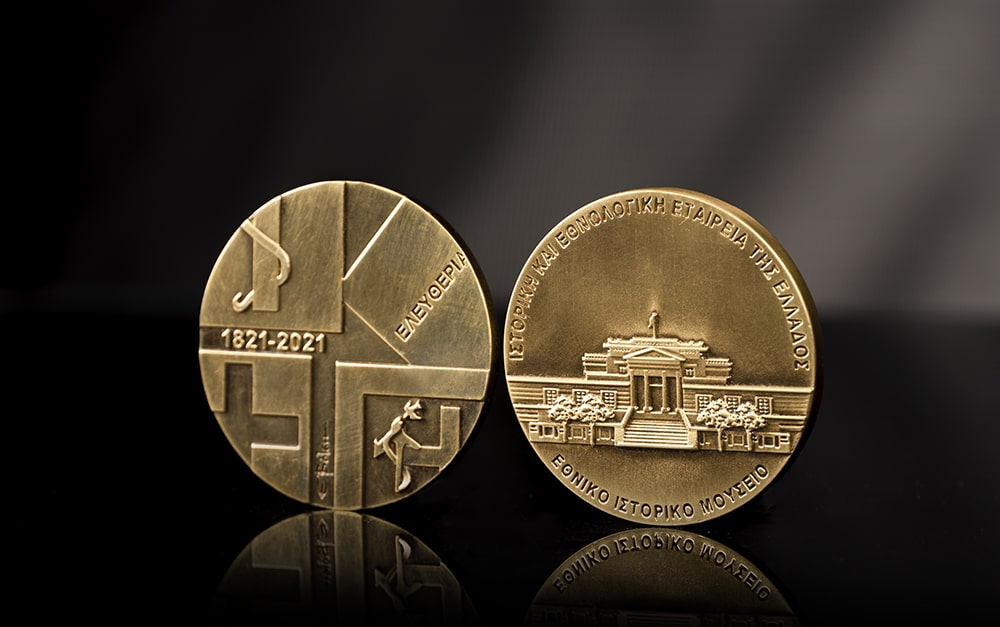 The National Historical Museum presents the commemorative medal, made for the bicentenary of the outbreak of the Greek War of Independence (1821), in the framework of the anniversary program “Revolution ΄21 Reframed”.

The medal, an object of remembrance of the anniversary and the significance of 1821, is an original creation, made by Elena Votsi, an internationally renowned designer from Hydra, who designed it exclusively for the Museum, on a non-profit basis. The casting and striking of the collectible, commemorative medal was made with the support of Piraeus Bank.

The medal depicts the façade of the National Historical Museum, the oldest historical museum in the country. From 1884 until today, its collections became part of the living memory of the War of Independence, as the families of the fighters donated valuable relics and archives to the museum.

The designer was inspired by the museum’s collection of the historical flags from the Revolution of 1821; naval ensigns of Hydra, Spetses and Psara with the inscription in Greek FREEDOM [OR DEATH], the symbols of the Filiki Eteria, the cross, the anchor, the owl and the serpent, symbols signifying the sanctity of the struggle, justice, and wisdom. Additionally, the blue-and-white flag, which was established by the Provisional Regime of Greece at the National Assembly of Epidaurus in January 1822.

The bronze medal is available at NHM shop (limited edition).